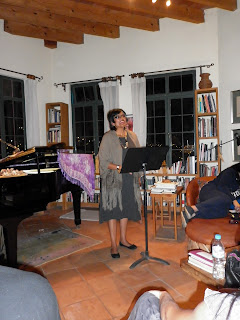 It was very cool, how this historical perspective required me to re-examine my ideas about the music itself and on the design of the program.  For example, I’d never thought of beginning with Uribe.  No reason, except that it’s a very intense and exalting piece.  But starting with Uribe WORKS!  Its warmth and beauty just energize the audience, they’re hooked going in.
As I said, it was also astonishing that it was possible to construct this micro-summary of Mexican history through the Monarca muses … chosen, permit me to say, by the composers themselves.  (I assigned nothing to anyone, in spite of advice from wiser heads who counselled me to be a bit more authoritative, or at least specific.  I’ll write about this soon).  I put Closing the Circle as the heading for the last piece, Charlie Griffin’s, because at the start of the piece I declaim a text which is translated into modern Spanish from 16th-century Nahuatl.  Yet another blog, because believe me, it’s quite a story. 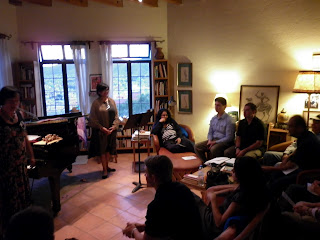 OK, the concert-conversation.  I began by asking, What do we think about when we think about a country – any country, in this case Mexico?  Of course: geography, history, economy, sociology.  The country’s art is always a subheading, assuming it’s mentioned at all.  And yet, speaking of any country at all, you can sum up all of the above-mentioned topics through its art . . . because art is the mirror of everything that happens in any society.  Yet another subject for yet another blog-post.  I know.  Patience.
There was a tad of last-minute panic on account of if we should talk Spanish-English, or just in Spanish.  I was getting a bit wound into a twist about this; and Lirio said, with that sensible simplicity which is one of the things I most appreciate in her, “Why don’t we ask the cadets what they’d prefer?” Ah HA, I said, and that’s how it was.
At the absolute gospel last minute, they called to tell me that there was a couple who wanted to come whose Spanish, truth be told, is not terribly strong.  I decided, Well, let them abide by the cadets’ decision.  And we are in Mexico, after all, jiminy.  And that’s how it was.  Lirio asked the cadets if they wanted our presentation in Spanish or bilingual and without missing a beat they all said, In Spanish.  ¡¡BRAVI!!  Their concentration was palpable and WOW, did they get it: I could tell from the questions afterwards.
So Lirio gave a mini historical context for each period and it was then that I spoke briefly about the piece when I considered it necessary, something to give them a way into the music.  Then the poem and its translation.  I really did not want to interrupt that magical moment between poetry and music with prose  about the music. 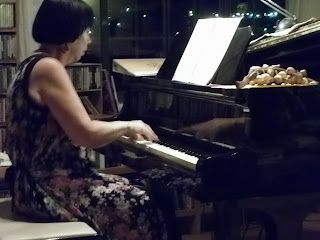 EVERY concert is special, but this one was particularly so.  What I love so much about very small venues –which my piano room is— is how tangible, at times audible, the audience response is.  At the end, we invited their questions and comments and absolutely everyone had something to say.
There were other people there too –some Mexican friends of the organizers, and some Quebecqois guests of mine whom I’d invited—and all of their commentaries and questions were also really good and thought-provoking.  At the end of the question part I asked that everyone take a minute to think about how we are all the Americas, that it’s not just the United States but also Canada, Mexico, our whole hemisphere.
OK, so those thoughts of mine … At the end, after all was said and done, they gave us gifts: a commemorative medal for Lirio, and for me a T-shirt with the logo of their language program, of which the image of the Lamp of Knowledge forms a part.  For some reason, when the faculty advisor explained about the Lamp of Knowledge I almost started crying.  It seems to me so precious, that Lamp of Knowledge and of Learning.  For everyone, for all of us. 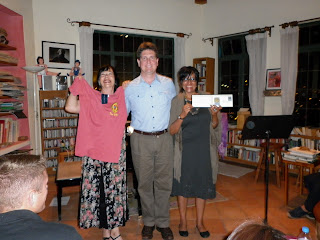 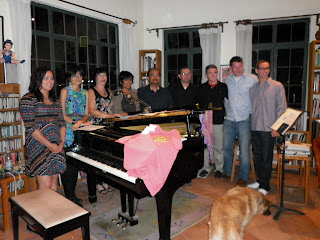 Spontaneously, various of the cadets said something expressing their thanks.  Very beautiful and from the heart: these were not formal, rehearsed words.  But there was more: later, various came up to me to say something, it seemed, more intimate and closer to the heart.  The first was the most military-looking of the five: handsome, erect, surely in enviable physical condition.  He said (now in English), hesitating a bit, “I just want to thank you because … well, in my whole life I have never been this close to a piano.  Or to someone who plays it like you do … it was incredible.  Long pause, and then, We lead a pretty linear life, you know?  And what you gave us tonight, well, it was something completely different, it made me aware of other parts of myself …”
A bit later, in the little drinks-and-nibbles session that followed, another cadet comes up to me, this time the only woman of the group and of Mexican heritage.  She says, also hesitating a little as we may do when speaking in an unaccustomed vocabulary, “I want to thank you because well, you made me aware of a part of my heritage … maybe you know that my parents are Mexican, and it was only recently that I came to Mexico to find out about my roots … well, I really didn’t know about some of these women and … that piece about the Casa Azul of Frida Kahlo …Oh jeez, I’m getting emotional …” and I could see her eyes welling up.  My own eyes moist, I touched her shoulder and said something like, “It’s OK, that’s the idea!”  Knowing how we get in these moments and what is often the remedy, I assign her a task: I give her my notebook and ask her to write her name and email, and then circulate it to the rest of the group for their coordinates.  “Yes, ma’am”, she says.
I confess that I didn’t know what to expect of this group.  My own stereotype of the elite cadet of West Point is that they take them and work hard to beat out of them every trace of empathy, sensibility, and right-brain activity, i.e. weakness.  As with all stereotypes, it had something of the truth in it, as well as exaggeration to the point of falseness.
From a certain perspective –like a devil’s advocate—one could say, “Jeez, these are the very crème de la crème of the most elite military academy of the US, how on earth could you argue that people like that need art – or that they even deserve it?”  I suppose this is some variant on the theme of blaming –and punishing, at times very cruelly, as in spitting on them— the soldiers who fought in Viet Nam for that horrible conflict, instead of their commanders and the “strategists” who designed the whole debacle.
I thought about it quite a lot, in fact, and concluded that it would have been simply unpardonable to not share this splendid music, and the wonderful poetry it partly inspired, with these young people.  In the same way that, a couple of days later, listening to Brahms’ 2nd Piano Concerto with Arrau, Haitink, and the Concertgebouw, I decided that not one single child in this world should grow up without hearing this music.
I’ve said for a long time that we are sowers of seeds.  And as such, we cannot know when and how those seeds may germinate.  Maybe in that very moment, maybe in six months or in six years or in twenty-six … and in reality it doesn’t matter when.  It is not given to us to know.  What’s important is that you’ve tapped into a vein: some empathetic faculty has been activated which in some moment may come alive, may even go into action.
I mean, if I am going to advocate for access to art –something which I feel is now absolutely urgent— then it must be universal access.  If one of these cadets, in some moment in six months, or six years or twenty-six, may make a decision or a choice which is more human, more empathetic, who will know if it wasn’t because of some seed that was sown that night of music and history in this house?
It’s not given to us to know, I repeat; and even less is it given to us to deny access to art because of some stereotype which we happen to have stupidly installed in our brains.  The person who made the choice to take and then circulate those photos of Abu Ghraib, or the Nazis who let themselves be carried away by the ideological current but then thought better of it and tried to do something which might make a difference … or countless numbers of humans through the ages whose conscience in some moment came alive … might that not have happened because of one of those seeds?  Human ethics and conscience move on their own mysterious and hidden ways which we can’t always make out in the moment.  And ART is one of the primary activators of conscience, because it activates our empathetic faculty.  And that is also, you see, why Art Is Dangerous.
You see?  We can’t be arrogant that way.  Universal access to art, down with stereotypes.  That’s what I say.
Publicado por Ana Cervantes en 18:58